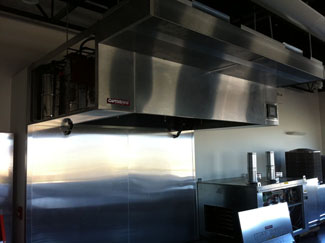 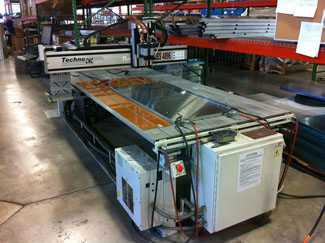 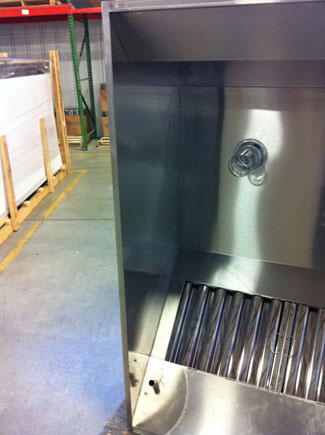 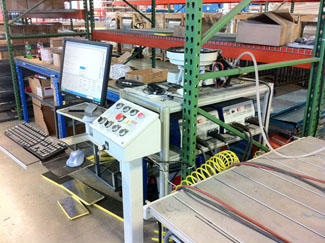 Stud welding was initially a manual process that was labor intensive, time consuming, and made it difficult to maintain the vertical position of the studs.

The Advantages of Stud Welding
Stud welding is ideal for the food industry since it eliminates sources of contamination as well as holes for potential leaks. It improves the strength and appearance of the parent material since studs are surface mounted on one side of the workpiece without holes or reverse side markings. Stud welds do not loosen because they are fused to the parent metal. Products made with stud welding include cookware, ovens, buffet heaters, handrails used in elevators, slot machines, signs and many others.

Advantages of Isel’s Cartesian Robot Design
CaptiveAire has long used stud welding to produce stainless steel restaurant oven hoods. Stud welding fasteners have a small tip that extends from the Isel USA, Inc. base. When triggering energy stored in capacitors is discharged, the weld is produced. Peak currents vaporize the tip, drawing a precisely timed arc that melts the full diameter of the stud and the same area of the parent metal. Spring loading forces the molten fastener against the surface of the workpiece and the weld is completed in about three milliseconds.

Converting from Manual to Automated Stud Welding
Luke Wilson, Quality Process Engineer for CaptiveAire, describes stud welding and why CaptiveAire relies on the process.
“We were very pleased with the benefits that stud welding provides to our customers but had concerns with the previous manual welding process. One problem with the manual process was the difficulty involved in positioning the studs against the 18 gauge parent material.
“The welder eyeballed the stud to put it into position and it was easy to place it at an angle. If the stud is not perpendicular to the material, then the nut that is fastened to the stud can put a dimple in the mating material. Another concern with the previous process was that it took a considerable amount of labor.”

IWT is unusual in the stud welding business in that it makes manual and automated stud welding equipment and cold heads, a complete line of fasteners. It is the largest producer of automated stud welding systems in the United States and the only automated stud welding system supplier that makes its own welding heads and auto-feed quality fasteners, which is critical to controlling the quality of the finished product.
“Several years ago, we recognized the benefits of automating the stud welding process,” said Neil Wilkinson, General Manager of International Welding Technology. “Originally, we built our own CNC machines in-house. But, as demand increased, we needed an off-the-shelf reliable positioning base which could easily support the stud welding application.
“An important consideration in selecting a supplier was the ability to provide the multiple I/O’s needed to drive our capacitor discharge power supplies. We make everything from very simple machines with a single feeder bowl and one head to machines with three weld heads supported by six feeder bowls. Each weld head and feeder bowl needs a signal from the control system to make it work.”

Faced with the challenge of finding the proper Cartesian gantry system, Wilkinson said:
“Isel USA met our challenge by providing a breakout board with their gantry systems that provides either 16 or 32 IOs. We connect these I/O’s to the various devices on our machine and control them through commands in the CNC program.
For example, one command tells the Cartesian gantry robot to bring the head into position to make the weld, another command advances the weld head, another command fires the head, another turns off the weld head, and so on.
Isel USA’s ability to control all of our equipment was an enormous advantage and one of the main reasons that we selected their gantry systems.”

The Isel Gantry System is equipped with ball screws on all three axes with closed loop servo motor drives that provide an accuracy of +/-100 microns per 300 millimeters (mm) and a repeatability of +/- 100 microns. The Isel Cartesian robot also provides a speed of 152 mm or 6 inches per second, which is fast enough to achieve high production rates. Off-the-shelf CNC programming software is used to control the motion of the Cartesian Robot and issue commands to the welding system. Easily modified VBscripts and servo-automation-control subroutines can be developed, saved in the computer and referenced to the panel being welded. These can then be recalled whenever the various panel configurations are required.

XY Cartesian Gantry System Features
The Isel Gantry System also features an XY travel of up to 60 x 120 inches. All axes are provided with a home reference switch and far end limit switch. Each axis is provided with two double slide linear rails and four double bearing blocks. The X-axis bearings and drive screw are mounted below the work surface to protect them from dust and debris. The X-axis has an aluminum dust cover and plastic lips seal to provide protection against contaminants. Heavy cast aluminum side plates support the Y-axis and provide increased stiffness for positioning and cutting applications. The system comes complete with electronics, cabling, motors and software so the end user has a complete solution from a single source, eliminating the cost and frustration of dealing with multiple vendors.

Spectrum Design worked with International Welding Technologies engineers to design a special fastener to address the concerns with reverse marking on the application. IWT's cold heading division enabled rapid development of various fastener tip configurations that could then be tested for weld strength and reverse side marking. They researched the CaptiveAire’s requirements and tailored the material properties of the fastener to provide optimal performance.

The stud welding process illustrates the advantages of working with companies that supply welding heads, CNC machines, and fasteners.  The first machine delivered to CaptiveAire uses a bottom load head in which the fastener is loaded into the bottom of the welding head and an auto-feed head. It has two heads for different types of studs. The stud welding system program moves the head to a point and moves the first or second head into position before firing the head.

"We have seen substantial improvements by automating stud welding with the CNC machines" Wilson concluded. "Our operators simply load a workpiece and run the program. Then while the machine is running, they can move to another task.
“The quality has been consistently excellent with studs positioned exactly perpendicular and no blemishes on the opposite side of the parent material. We are so happy with our first CNC stud welder that we recently purchased four more automated welding machines to put in each of our four other manufacturing facilities."