A shot of the belt sander that makes it possible for one operator to produce six times as many drives belts per shift as in the past.

This photo and the next: Two shots of the belt sander in action. 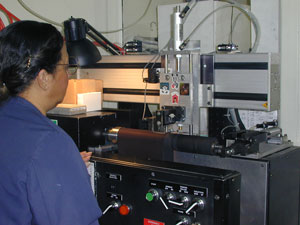 A special automation project that relies on low-cost, standard components has made it possible for one operator to produce six times as many drives belts per shift as in the past. In the past, when operators manually indexed a knife to cut the belts, they could produce about 100 per hour. Stock Drive Products, New Hyde Park, New York, the company that produces the belts, had the idea of automating this difficult and expensive job. A sister division, Techno-Isel, also based in New Hyde Park, created a design that uses standard components such as slides and servo controllers to completely automate the job. The new belt slicing machine produces 300 belts per hour with minimal manual intervention, making it possible for a single operator to run two of the new machines simultaneously. Quality is also improved by the consistency of the automated slicing operation. “The new automated machine substantially reduces the cost of producing timing belts while demonstrating how small, low-cost automation projects can provide a big payoff,” said Bob Gaulrapp, Manufacturing Manager of Stock Drive Products. “And these are just prototype machines – their performance could be fairly easily increased based on the knowledge that we have gained by running them.”

Stock Drive Products manufacturers and distributes over 68,000 electro-mechanical, mechanical and linear motion components, and subassemblies components through catalogues as well as over the Internet. The company has 300 employees and occupies three plants with a total of 58,000 square feet. It provides over 15,000 different timing belt drives -- the world's largest off-the-shelf selection anywhere. Stock Drive Products also offers a catalog on CD-ROM that calculates timing belt drive center distance or belt length. Timing belts are basically flat belts with a series of evenly spaced teeth on the inside circumference, thereby combining the advantages of the flat belt with the positive grip features of chains and gears. There is no slippage or creep as with plain flat belts. The positive nature of timing belts makes them capable of transmitting large torques and withstanding large accelerations. In addition, different parts of the drive will maintain a constant speed ratio or even a permanent relative position. This is extremely important in applications such as automatic machinery in which a definite motion sequence or indexing is involved. Belt drives are particularly useful in applications where layout flexibility is important. They enable the designer to place components in more advantageous locations at larger distances at a much lower cost than a gear train. Required belt tension is low, therefore producing very small bearing loads.

Previous manual operation
Stock Drive produces belts from rubber sleeving that contain the teeth on the inside circumference but must be cut to the proper width. Because of the large number of different belts that it offers, for many part numbers, the company stocks the sleeving and produces the belts in lot sizes ranging from 1 to 10,000 as customer orders arrive. In the past, the belts were produced on slitting machines that were essentially modified lathes. The operator began a new job by setting bars that guide the operation of the slitter to control the width of the belts. The operator then inserted a piece of sleeving, which typically ranges in width from 12 to 24 inches. Then they pushed the bar forward to cut a belt. The next step was manually indexing the belt against the bar. Operators were typically able to produce a belt every few seconds at the beginning of their shift but their productivity slipped as the shift progressed because of the taxing manual nature of the job. Another concern, as the operator got more tired, was that they might fail to properly index the belt and cause width variations. Management was equally troubled by the fact that they had difficulty finding people who wanted to perform this difficult and boring job.

Concerned about the problems with this operation, Stock Drive Products managers consulted with their counterparts at Techno-Isel, one of the world’s leading producers of precision motion components. Techno engineers suggested that a machine could be developed to automate this operation rather quickly using standard components from the catalog. Their basic concept was that the belt would ride on a ball screw slide driven by a stepper motor while a pneumatic actuator would operate the knife. Recognizing that the actuator would not provide the precision motion control required for the actual cutting operation, the engineers suggested that a hydraulic damper be engaged for just the portion of the stroke in which cutting takes place to provide the needed cutting action. They proposed the use of a Centurion single axis controller to operate the stepper motor and said they could write a program that would allow the operator to easily select the width of the belt and put the machine into operation. Stock Drive Products thought that this concept would work and they also liked the price, which was very low because the machine was built entirely with pre-engineered standard components.

Designed from building block components
Management gave their go-ahead to the project and Techno began detailed engineering design work using building block components. They selected as the heart of the machine one of their standard duty slide that comes in standard stock travel lengths of 75 mm to 1275 mm and is available in 2.5, 5, 10 and 20 mm screw pitches. The rolling contact of the ball screw and anti-backlash nut gives this slide great precision and high efficiency. The slide also includes an integrated aluminum housing with rubber seals, limit switches on both ends of travel, a 125-oz.in stepper motor and a 220x175 mm table plate for mounting the tooling. The all-inclusive slide is delivered assembled, wired, mounted and tested in a 75 mm length of travel for a price of only $995. An important advantage of this slide is that it comes equipped with an aluminum housing with rubber seals that protect the slide and allow for greater travel length in a smaller package. The integrated rubber seals keep out the undesirables: dirt, dust and debris. The limit switches are mounted inside the protective aluminum housing, keeping them from being damaged as well. Other slides that have accordion-like way covers can reduce travel by as much as 15%.

Techno engineers selected the Centurion self contained single axis stepper motor and I/O control system. The Centurion is capable of controlling and driving 2 or 4 phase stepper motors and features integrated I/O. The controller also simplified the wiring and preparation as it had all the power supplies built in and also has START, STOP and ESTOP buttons on the front of the unit, no additional wires or panels to prepare. This controller/driver is designed to perform a variety of automation related, motion control, inspection, dispensing and production applications. It features a standard 32K battery backed memory capable of storing 10 programs (switch selectable) and up to 5,000 motion commands, 8 digital inputs, 8 digital outputs, operator control panel, remote start and stop capability, manual jog feature, watchdog timer and motion control software. The controller is designed to communicate with a PC via an RS232 interface. Connections for I/O are made with plugable screw terminals located on the controller's back panel and motor connection is made with a 9 pin D connector.

Programming the machine
The user interface was written with ACL software, an easy to use automation program that is provided with the Centurion. This program allows all the motion and I/O functions of the Centurion to be utilized. It includes a full screen text editor, an integrated compiler with easy to use debugging features, an integrated communications program to download and test programs and sample programs in QuickBASIC to write supervisory programs. The editor and compiler allow the editing and compilation of a motion control program using simple, English-like commands. The communications program allows complete control and transfer of a program from the PC to the controller. The jog program allows manual positioning of the motor from the PC's keyboard. It also has a teach mode which will automatically generate a program. Once a program is loaded into the controller's memory, it may be controlled either from the PC or from the controller's front panel. The Centurion controller may also be completely disconnected from the PC for completely stand-alone use.

The result, according to Perry Pierides, Manager of the Belt Department, is a dramatic performance improvement. “The operator simply puts the sleeve on the machine and enters the program on the controller for the width of belt that they want to produce,” Peirides said. “Then he or she hits the start button and the machine starts producing belts much faster than in the past. A simple rotary spindle spins the belt and a pneumatic cylinder provides the down motion of the razor blade that cuts the belt. The bottom line is that each new machine produces three times as many belts as an operator could do in the past and one operator can easily run two machines. The machine runs at the same speed and maintains the same high level of quality for the entire shift. The machine paid for itself in a matter of months and continues to provide major manufacturing cost savings. Meanwhile, the belt slitting job has gone from one of the least to one of the most desirable in the shop.”