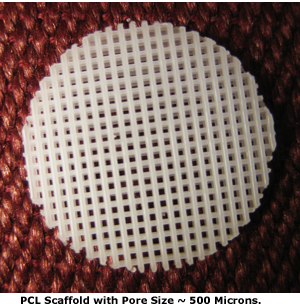 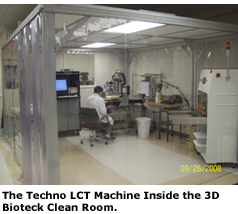 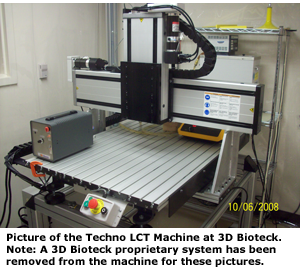 Accurate But Inexpensive Gantry Machine Facilitates Production of 3D Cell Cultures
Conventional 2D cell cultures are conducted in monolayer in cell culture plates. In real living bodies, cells grow in three dimensions so 3D cell cultures provide a better model for studying the interactions between cells and growth factors as well as between cells and therapeutic agents. 3D Biotek LLC has pioneered the introduction of 3D cell culture devices for tissue engineering and drug discovery applications. 3D Biotek has developed a unique method for fabricating 3D cell cultures using micro-fabrication technology. A critical aspect of the fabrication process was identifying a method of positioning the extruder with the high levels of speed and accuracy needed to create the porous matrix or scaffold that the 3D cell culture grows within. “We discovered that the Techno Gantry System LCT provides speed, accuracy, and programmability at a reasonable cost,” said Wing Lau, Chief Operating Officer of 3D Biotek. “The machine gives us the ability to build scaffold at the very high levels of accuracy needed to create pore sizes of only 300 microns.”

Advantages of 3D Cell Cultures
Cell cultures are a very useful and widely used technique in stem cell research, pharmaceutical develpment, pharmaceutical development, cell biology, toxicology, bioengineering and tissue engineering for observing and studying cells and their interactions with pharmaceuticals, biological factors and biomaterials. Conventional cell cultures are conducted in cell culture vessels such in 96 well cell culture plates. While culturing cells in 2D is convenient it may be unrepresentative of living cells which usually grow in 3D while building living tissues and organs.

Emerging evidence has suggested that 3D cell cultures offer important advances. Studies have shown that human annulus disc cells cultured in 3D gel systems showed different morphology than those cultured in 2D. 3D cell culture is also a better model for studying the interactions between cell and growth factors as well as cells and therapeutic agents. 3D cell culture systems can also facilitate the understanding of the structure-function relationship in normal and pathological conditions.

As an example of the benefits of 3D cell cultures, an article in the Journal of Proteome Research by researchers from Ludwig Maximilans University, Munich, Germany, showed that tumor phenotypes more closely resemble 3D cell structures than traditional cultures, suggesting that 3D cell structures will make better models for testing new anticancer agents. The researchers stated that: “The lack of suitable cancer model systems, which sustain the properties of the original tumor in vitro, is a general flaw in cancer research.” The researchers compared several different proteomics techniques to show that multi-cellular spheroids have a closer resemblance to in vivo tumors than monolayer cell cultures. Spheroids devices from the COGA-5 cell line expressed levels of proteins that much more closely matched in vivo tumors than did monolayer cultures. One of the proteins that was down-regulated in 3D cultures but not 2D cultures was acidic calponic, suggesting that 3D cell cultures provide a different architecture.

The Challenge of Building a 3D Scaffold
3D Biotek was founded in 2007 with the goal developing 3D porous devices for stem cell culture, tissue engineering and drug discovery applications. Micro-fabrication platform, the core technology of the company, consists of various sub-systems carefully designed and integrated to work cooperatively in order to fabricate scaffolds of desired shape and structure. Motion and positioning system with high precision is one of such required sub-systems.

The biggest challenge in producing the 3D scaffolds is that various sub-systems of the micro-fabrication platform need to work together seamlessly in order to fabricate the scaffolds with the designed pore size and porosity, which in turn, requires a motion and positioning sub-system with high precision. The pores are the tiny gaps in the scaffold where cells are cultured. 3D Biotek currently builds scaffolds with pore sizes of only 300 microns and can reduce the pore size to 100 microns or smaller if needed.

“Finding the right machine with the required precision presents another challenge,” Lau said. “Most of the gantry systems that we looked at did not have the accuracy to maintain the precise positioning of 10 microns or so required for our applications. Also, some of the machines that we looked at were slower than what we were hoping for.”Gantry System

Overcomes Positioning Problems
Then Lau identified the Gantry System LCT from Techno, Inc. The Techno Gantry System LCT is equipped with ball screws on all three axes with closed loop servo motor drives that provide an accuracy of +/-100 microns per 300 millimeters (mm) and a repeatability of +/- 100 microns. The critical dimensions are the pore sizes which range from 200 to 500 microns. Over a distance of 500 microns, the accuracy of the Gantry System LCT is less than 1 micron so the machine can hold pore size to much tighter tolerance than is required. The Techno machine also provides a speed of 152 mm or 6 inches per second which is fast enough to achieve high production rates. 3D Biotek developed a Fabrication Program with Microsoft .Net technology that accepts as input basic parameters of the scaffold such as the outer dimensions and pore size. The program then generates a G-code toolpath file that guides the machine through the intricate series of motions required to produce the scaffold.

The Gantry System LCT also features an XY travel of 30 inches by 24 inches. 3D Biotek also utilized the optional z-axis which has a 5 inch travel. All axes are provided with a home reference switch and far end limit switch. Each axis is provided with two double slide linear rails and four double bearing blocks. The X-axis bearings and drive screw are mounted below the work surface to protect them from dust and debris. The x-axis is provided with an aluminum dust cover and plastic lips seals to provide protection against contaminants. Heavy cast aluminum side plates support the y-axis and provide increased stiffness for positioning and cutting applications. The machine comes complete with electronics, cabling, motors and software so the end user has a complete solution from a single source. This eliminates the cost and frustration of dealing with multiple vendors.

“The introduction of 3D Insert will significantly change the current cell culture landscape,” Lau concluded. “3D Biotek believes that 3D scaffold will enable a revolutionary transition from 2D to 3D cell cultures. The better correlation between the results from in vitro 3D cell culture with the preclinical model and human patient will decrease the overall therapeutic and pharmaceutical product development cost and shorten the time to market.”

“The Techno Gantry System LCT has played a major role in the success of our 3D Insert cell culture device,” Lau said. “The Gantry System LCT gives us the high level of positioning accuracy that we need to build 3D scaffold with very small pore sizes. The machine also provides us with high production rates. The result is that our 3D Insert product has already achieved considerable success in conducting stem cell in vitro expansion, differentiation and tissue engineering research.”